I overheard a conversation on the train last week – of the three people huddled around the small table, one was obviously the team's self-appointed technical expert. He was offering opinions on all manner of IT issues: how to speed up computers, whether to use cheap inkjet cartridges, and so on. And in general his answers were spot on.

But then someone asked him about mobile networks. The question was along the lines of "When I do a manual network search on my phone I can only see the main networks such as O2 and Orange. My phone is on Virgin, but that network never shows up in a search. Yet when I do an automatic network selection my phone connects correctly to Virgin's network. Why is that? How can it connect to a network which isn't there?"

At this point our technical expert did what many gurus do when they don't know the answer – he just made something up! Apparently the reason Virgin's network doesn't show up is "because it is one of the 'hidden' networks". And "it's a bit like when you hide the name of your Wi-Fi at home, to stop hackers from seeing it. All of the recent networks are doing that".

Even if the fella's technical skills failed him, I have to give him at least 9/10 for his mastery of bullshit. He gave his answer in a totally believable way, even backing it up with the Wi-Fi SSID hiding comparison. Of course, his answer was complete and utter hogwash.

The reason Virgin doesn't show when you do a manual scan is because the company doesn't have its own mobile network. Instead, it is what it known as a mobile virtual network operator, or MVNO. This means that Virgin Mobile isn't a licensed mobile frequency holder, and as well as not having any of its own GSM or 3G spectrum, it also doesn't own any mobile network infrastructure. Instead, it sits on the back of the existing T-Mobile network, with TMo providing the access and Virgin handling the sales, customer service, billing, etc. 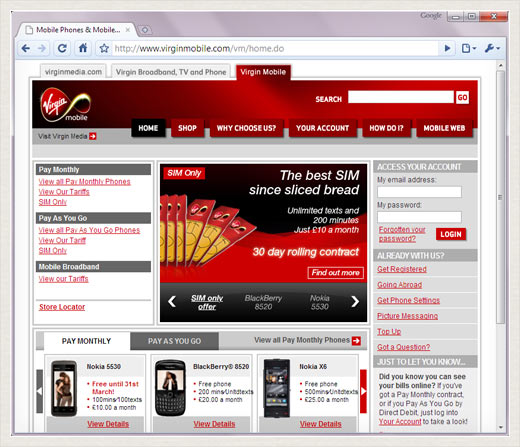 Virgin does the customer facing stuff, but the network underneath is T-Mobile’s

Together, Virgin and T-Mobile really invented the whole MVNO idea – in fact if you believe certain news sources the idea was conceived by Richard Branson himself! As well as being the first MVNO, Virgin Mobile is, I believe, still the largest MVNO in the world, with over 4 million customers.

There are now hundreds of MVNOs worldwide, but here in the UK the main ones that you'll come across apart from Virgin are the Supermarkets networks such as Tesco and ASDA.

By knowing which network lies underneath your virtual mobile operator you can start to make an informed choice based on what you know about network reception where you live, work and play. If there's a rubbish Vodafone signal at home then you should steer clear of ASDA or BT Mobile phones, for example.

There are also some interesting effects you'll find when it comes to phones being locked to particular networks. In general, MVNO supplied phones will have a more stringent lock than those supplied by the main networks. Take O2 and Tesco, for example. If you pick up a cheap PAYG phone with your weekly shop at Tesco, and then try putting your O2 SIM in it, it won't work. But do this the other way round, put a Tesco SIM into an O2 branded phone, and you'll be fine. Likewise a Virgin SIM will work in a T-Mobile phone, but not the other way round. It's useful to know tricks like this if you want to pass your hand-me-down phones to your kids or other family members.

Here's a list of the major UK mobile virtual network operators, showing which physical mobile network operator (MNO) they use to run their network access services. I think I've got most of the major ones covered, but please forgive me if I’ve missed some of the smaller players. Incidentally, as well as MVNOs, I've also included the cases where a mobile networks provides 2G fallback or national roaming for another primary network (such as Orange providing 2G coverage for the Three network)