Not All Touch-Screens Are Created Equal

If you look at the specifications of touch screen phones, tablets, and even some touch screen PCs you’ll notice the terms Capacitive and Resistive used. The latter is more often associated with less expensive devices. But what are these two technologies and is one always better than the other?

The older of the two, at least in smartphone terms, is the resistive touch screen. The front surface of the screen is usually a scratch resistant but flexible plastic layer, with a thin film of conductive material (usually Indium Tin Oxide or ITO) printed onto it. Behind this flexible layer there’s another layer, usually made of glass but sometimes very and inflexible plastic, which also with a layer of ITO printed onto it. These two layers are kept apart using tiny bumps or spacers at regular intervals. Because of the nature of ITO and the thin layer there’s actually an appreciable electrical resistance across the screen.

The screen is constructed so that there’s a charge running top to bottom on one of the layers, and side to side on the other. When the screen is touched the plastic and glass layers come together, so the two ITO films touch. By measuring the resistance of both layers at the point of contact it’s possible to get a very accurate measurement of the point where the layers came into contact. This does of course rely on a very even coating of ITO on the layers, and accurate calibration. With some very early touch screen mobile devices the calibration would drift as the battery became depleted, but unless you buy fake phones from far eastern vendors on eBay you shouldn’t find problems like this.

Most older phones use resistive screens, but that’s not to say it’s an out of date technology – phones are still being churned out using this type of screen (a good clue is normally that the device is supplied with a stylus, although not always).

When it comes to capacitive touch screens there are two types generally available, surface and projected. It’s the latter which you’ll find in smartphones and tablets. Again these consist of a sandwich – this time there are two spaced layers of glass (well, it’s usually glass), again with ITO on the inside. Depending on the particular screen the ITO can be a flat layer, or a grid, or parallel stripes running one way on the top sheet and the other on the bottom. It’s the latter which is used by devices like the iPhone and iPad.

If you think back to your physics lessons at school you’ll remember that a capacitor is basically two plates separated by a dielectric (or insulating) material. And this can of course be air. Now picture those perpendicular stripes on the two glass plates – at each point where one stripe crosses another it forms a very small capacitor. And when I say very small I really do mean it – for the electronics gurus among you the capacitance is measured in femto-Farads (10-15 F). This small size is both bad and good: bad because the capacitance is so tiny it’s actually quite difficult to measure, and requires quite complex filtering to eliminate noise. But it’s good because with such a small capacitance it’s not just the gap between the ‘plates’ which affects the capacitance, it’s the space around them too. So as a finger is brought (very) close to the capacitor it changes the local electrostatic field.

Because the system is constantly monitoring each of these tiny capacitors it’s possible to know exactly where a finger has touched the screen. And what’s more, because the measurement points are discrete it’s possible to tell if there are several fingers all touching the screen at once.

Meanwhile, back in the Real World

So what practical differences are there between the two technologies? Well, first and foremost, resistive screens are stylus friendly while capacitive screens favour a swipe with a finger. OK, that’s a bit of a gross generalisation – manufacturers have made more recent resistive screens which are much more finger friendly. And some clever people have come up with highly conductive styluses which (kind of) work with capacitive screens. In both cases the solutions are marketed with slogans such as “as good as a …. screen” but in reality they aren’t. For finger based interfaces capacitive is still much better. And if you need the single pixel accuracy that a stylus gives then resistive is the only sensible option.

I mentioned above that capacitive screens can sense more than one press at a time, and that brings us on to a major advantage – they can do multi-touch. For those of you who’ve never used a multi-touch interface before I can best describe it as a real “someone switched a light on” experience. And the classic demonstration is Google Maps: If you want to zoom in on an area you simple make a pinch gesture on the screen and the map zooms proportionally. Or pinch outwards to zoom in the other direction. It’s a brilliant control mechanism and is totally intuitive. Oh, and yes, I do know that about a year ago a couple of companies demonstrated ways to get multi-touch working using resistive screens, but as far as I’m aware this has not been tried with a smartphone yet.

There are companies making resistive multi-touch screens, but they don’t seem to have made much headway yet

An area where resistive screens win is cost. Capacitive screens (and their associated controller chips and other frippery) usually cost around half as much again as their resistive counterparts. Although that’s probably not much of a problem on a high end smartphone, where the profit margins tend to be pretty huge, it becomes more of an issue with entry level devices.

The question of which technology is most robust is an interesting one. Because the front element of a resistive screen needs to be flexible, it’ll be some type of plastic. And as anyone that’s ever been sold a scratch resistant coating on their glasses will know, there’s no such thing as scratch resistant plastic! But on the other hand, capacitive screens, being made of glass, are more susceptible to being shattered by a sharp knock. I have a friend who keeps her iPhone in her handbag, along with, well, you know, all the other stuff that women tend to keep in there! She’s now on her third iPhone because sharp objects (probably the corner of a kitchen sink) keep destroying the screen on her phone. Of course she could keep the phone in some sort of protective case, but that’s a bit of a cop-out. The whole point of a modern phone is that you have it readily to hand. Whenever I need to carry an iPhone in a bag (usually a rucksack), I try to carry it in one of the internal pockets / compartments, with the screen facing outwards. 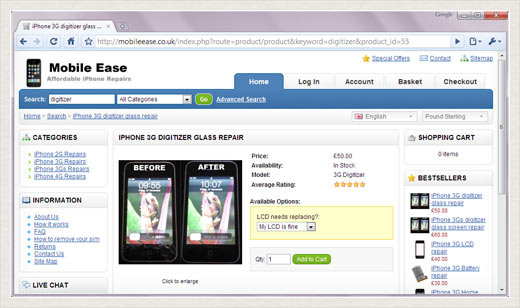 If you do shatter your iPhone touch screen, you’ll find you can get it fixed for around £50

Carrying cases raise an interesting point. With a resistive touch screen you can buy snugly fitting skins or protective cases, where the screen area is a thin clear window. Because this is very flexible the touch screen will work through it. Sure it won’t be as responsive as riding bareback (if you get my drift, and check urbandictionay.com if you don’t), but it will work. The same isn’t true of a capacitive screen, where the tolerances are so small that any form of barrier will be a real, well, barrier. You’ll also find that capacitive screens don’t work if you’re wearing gloves (although some manufacturers have cottoned on to this and are making gloves with electrically conductive finger tips). And it’s also pretty much impossible to use a capacitive screened device in the rain.

Resistive screens win hands down when it comes to accuracy. A well calibrated screen should be able to detect the stylus to within one pixel accuracy, although because the touch surface is usually a few millimetres above the LCD there will be potential parallax problems. Calibrate it when looking head on and it’ll be a pixel or two out if you use the device at an angle.

There’s no need to worry about pixel accuracy with a capacitive screen because the sensor simply won’t give you that degree of precision. At best it’ll give you a reading accurate to two or three pixels in either direction, but then if you factor in the fact that you need a finger dab rather than a point source in order for the touch register, you’ll realise that capacitive screens simply aren’t designed for accurate on-screen work. One side effect of this is that handwriting recognition works well on resistive screens (even when using a finger nail rather than a stylus), but attempts to read writing on a capacitive screen have so far been hopeless.

When it comes to visibility, there’s not much difference between either types of screen when used indoors. But outdoors you’ll usually find that capacitive screens work best in bright sunlight. Although both types are always going to be worse than a non-touch screen, because all those layers of glass and/or plastic in front of the screen reflect bright ambient light.

So, as you can see, it’s a real case of horses for courses. Both technologies have their pros and cons. To my mind, if you’re running an ancient OS such as Windows Mobile 6.x, with its tiny controls and on-screen furniture, then you really need a resistive screen. With a modern touch friendly OS such as Android you’ll almost certainly find that capacitive screens work best. But there’s a gap somewhere in the middle, people who want a finger friendly device but occasionally need to RDP into a server at work, for example – an activity which requires precise mouse control. Or maybe you’re a property agent and need to be able to sketch out rough floor plans on your phone. For people like these the choice isn’t quite so obvious – they may well do better with a resistive screen.