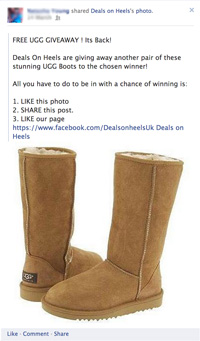 Those of you who use Facebook will no doubt have seen your friends and family posting all kinds of stupid and apparently pointless puzzles.

Quite often they’ll be silly competitions such as "Name a band that doesn’t have an A in its name – it’s harder than you think" (of course it isn’t hard, since there are millions of bands without the letter A in their name). Or rather than a question, you may see a photo with instructions such as "Click on the photo, post a comment, see what happens". Of course, nothing happens.

Yet another variation involves liking a page and sharing a photo, with the promise that you might win something valuable. Quite often it will be a photo of iPhones or iPads, but I’ve also seen a trend towards expensive shoes and handbags. Sometimes, the name of the account running the competition will be something that looks quite genuine too.

I’m sure most people probably suspect that it might be some sort of scam, but think "What the heck, it isn’t doing any harm, and there’s always a slight chance I might actually win". Actually, they are doing some harm: for starters, they get you to share this rubbish with your friends, which is likely to lure them into doing the same – but mainly they help along the scammers’ business model.

The business model behind these quasi-competitions is that they’re trying to get as many likes or comments as possible, and that’s all. No prizes. You’re never going to win an iPhone or a pair of Ugg boots, or see that picture change. They just generate plenty of activity, often collecting hundreds of thousands of comments and likes.

Facebook employs an algorithm called EdgeRank for its newsfeed optimisation: working a bit like Google’s PageRank, it prioritises how often things will appear in peoples’ Facebook feeds. Pages with lots of likes and comments will get a much higher EdgeRank placing, which is why so much of this guff shows up in your newsfeed.

But where’s the beef? Well, a page with hundreds of thousands of likes is a very valuable commodity. Many brands, both large and small, are starting to venture into social media, and the first thing they learn is that it can take months or even years to build up an online community.

As a result, many are prepared to buy a pre-built community from a scammer (although, of course, being novices they’re probably unaware of the scam element involved). Someone who wants a quick win – it might even be another scammer – buys the page and instantly has a huge following with lots of likes and comments, and a long-established EdgeRank capable of pushing out updates to hundreds of thousands of users. It’s a marketing manager’s dream!

To be fair, Facebook has tried to tighten up in this area slightly: until fairly recently, the scammers could change the name of the page when they sold it to reflect its new owner, but a while back Facebook changed the rules so that you can’t change the name of a page after it has received more than 200 likes. Even so, the scammers get around this restriction by giving their "puzzle" a fairly official-looking name in the first place.

I must admit that I too become irritated seeing friends and family taking part in these scams, especially those who really ought to know better – I even found a friend with a senior position in IT security sharing a "Win an iPad" photo. But until someone has explained to them how the scam works (as I’m now doing), it’s difficult to see what problems it might cause.

She may not be on Facebook, but your gran’s old "if it looks too good to be true it probably is" adage is as correct today as it has ever been, and is especially important in the social media world. Although if your gran has/had any sense of irony I expect she'd appreciate it if you were to share this article with your friends and family!